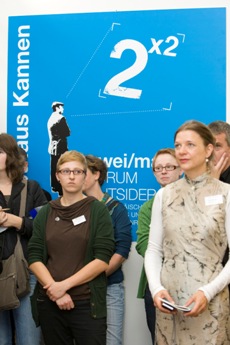 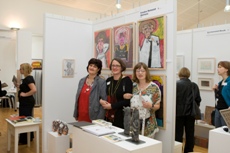 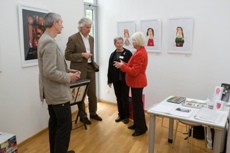 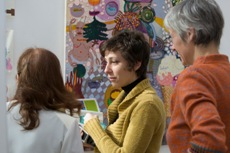 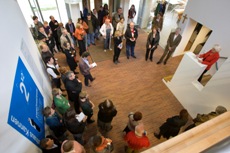 A European platform for Art Studios and Artists in Münster/NRW

“2x2“ is the title and also the concept of the exhibition: Between the 1st and the 4th October, 22 studios from Germany, Spain, Italy, Finland, Austria, the Netherlands, Luxemburg and Russia will come together in Kunsthaus Kannen in Münster to display their work, answer questions and be ready to take part in discussions and stimulating dialogues. Each participating studio has been provided with an area of 2x2 metres for its respective presentations. The exhibition hall at Kunsthaus Kannen will be filled compactly and diversely with the presentation areas being clearly demarcated for each individual studio.

Whilst there have been extensive and wide ranging discussions about the ideas, concepts and meaning of Outsider Art over a long period of time, the developments in the sector actually speak for themselves. By way of example, the workplace for artistically active mentally ill patients, which had been previously set up by the Austrian psychiatrist Leo Navratil and which was then properly established in the 1980’s, has made a name for itself and has gained international recognition as the Art/Brut Centre Gugging. In the same way, the Alexianer Hospital had been promoting especially talented patients since the 1980’s and this then culminated in the creation of Kunsthaus Kannen in 1996 as a fixed place of work for artists and also as a museum for Outsider Art und Art Brut. In the meantime, works of art from Outsider Artists have also become available on the art market and the word “Academy” has become a term used in the context of artistic sponsorship. Observers may judge all this in different ways. The fact remains that much has been achieved in Outsider Art over recent years and in the past decades.

The 2x2 Forum for Outsider Art now provides the general public with the possibility of gaining an insight into the results of these developments and how these have come about in different ways throughout Europe. Paintings and drawings, videos, films and objects reveal the broad spectrum of ‘Outsider Art’. In addition to the well-known studios, such as the Gugging from Austria, Studio exhibit the work of their artists.

The exhibition will be concluded with a one day series of lectures with a final podium discussion and by the theatrical production „Zu Wild Zu Bang“ by the Theaters Sycorax from Münster. In addition, there will also be a round of discussions for artists and art therapist. While the 22 exhibitors will be presenting their work in the Kunsthaus, disabled people from neighbouring art workshops in the Münster area will also be active in the workshop „2x2 Farbgewitter“, which will take place in the park in front of the Kunsthaus.

Bringing together the diversity of all that is happening in Europe in the context of „Outsider Art“ in Kunsthaus Kannen will enable not only the general public to discover this art, but will also provide a showcase of all the influences which have been motivating Art Brut and Outsider Art over a long period of time. We anticipate exciting discussions and new impetus for all visitors and exhibiting studios. May the ideas, concepts and initiatives of the present and of the future continue to be cultivated, develop and deepen!